On June 2013,Brazil saw its biggest wave of mass mobilizations in history. The demonstrations, originally targeting high public transport fees, quickly evolved into demandsfor quality public health and education. Much of the anger wasfuelled by the spending of billions of dollars on the world cup, while schools and hospitals are abandoned. Protests questioned social inequality and the legitimacy of Brazil’s institutions. Headed by the youth, the protests where harshly repressed by the military police. Yet, in most of the major cities of the country, including Rio de Janeiro and São Paulo, the rise in fees was defeated.

The June uprising opened a new political situation in the country, with demonstrations becoming an every day phenomena, pushing back both the police and government. The existenceof the military police itself, a product of the military dictatorship,is being widely questioned. Yet, by the end of 2013, a brutal counter–offensivehas been launched on different fronts. Since then, the police has brutally repressed street demonstrations while hundreds of activists have been indictedas members of “criminal associations”. The Dilma government, with the objective of investigating demonstrators, has put at the service of different local governments ABIN, the intelligence agency directly subordinated to the presidency.

Anti-terror law
Now, a new chapter in the war is beingrehearsed. The National Congress, in anattempt to defeat the protests, is planning to vote a law that will regulate the crime of “terrorism”. If approved, any demonstratorwill be considered a potential terrorist and arrested for a period of over 30 years. According to the vaguely defined crime, a “terrorist” is someone “responsible for provoking or defusing terror or general panic through attempts or attacks against someone’s life, physicalintegrity or health or impeding someone form exerting there freedom”, the sentences vary from 15 to 30 years (24 to 30 in case of deaths). Senator Jorge Viana, from the Workers Party (PT), the same party as President DilmaRuseff, proposed an urgency vote on the issue. His moves are supported both by the government and the right wing opposition.

The law Project, known as “Fifa standard AI-5”, a reference to the AI-5 Law, imposed by the military dictatorship during the 1960s that closed Congress and harshened repression, seeks to end all demonstrations during the FIFA World Cup (scheduled for June 2014). Another of its objectives is to avoid a possible electoral crisis for the PT government. It is not a surprise that the term “terrorist” was exactly the same as the one used by the former dictatorship to describe activists that fought against brazils authoritarian regime.

In its attempt to win over public support for the new terror law, the government and its base are using in a morbid and opportunist manner the recent death of the camera-man Santiago Andrade, an employee of Bandeirantes television. The camera-man was filming a protest against the new raise in bus fees on February 6 in Rio de Janeiro when, amidst a harsh police repression of the demonstration, he was hit by firework crackers. Santiago died 4 days after his injuries, a fact that gained international repercussion. The death of the journalist is widely being used by both press and government in an attempt to water downresistance to the terror law.

Currently, even without a specific terror legislation, hundreds of activists are being sued and under the threat of arrests. Since June last year, two thousand people were detained by the police, 700 of them only in Rio.

Rio de Janeiro was also the first place in the country where a demonstrator was condemned during the June protests; a homeless man, whose bottle of detergent was classified as a “Molotov cocktail” by the police. He has been condemned to five years in prison. On January 25, a young demonstrator in São Paulo was gunned down by the local police after leaving a protest.

The official reason behind the presented harshening of repression, the need to fight the “black blocs” is just an excuse to attack the organized sectors of the social movement, including left-wing parties and organizations. The most recent move of the police was to announce an investigation of organizations that supposedly “finance” the demonstrations “alluring” youths to engage in violent acts of protest. In a country accustomed to police forging proof to incriminate activists, the current investigations indicate not only a new stage in the criminalization of protests, but also of the organizations which take part in them. 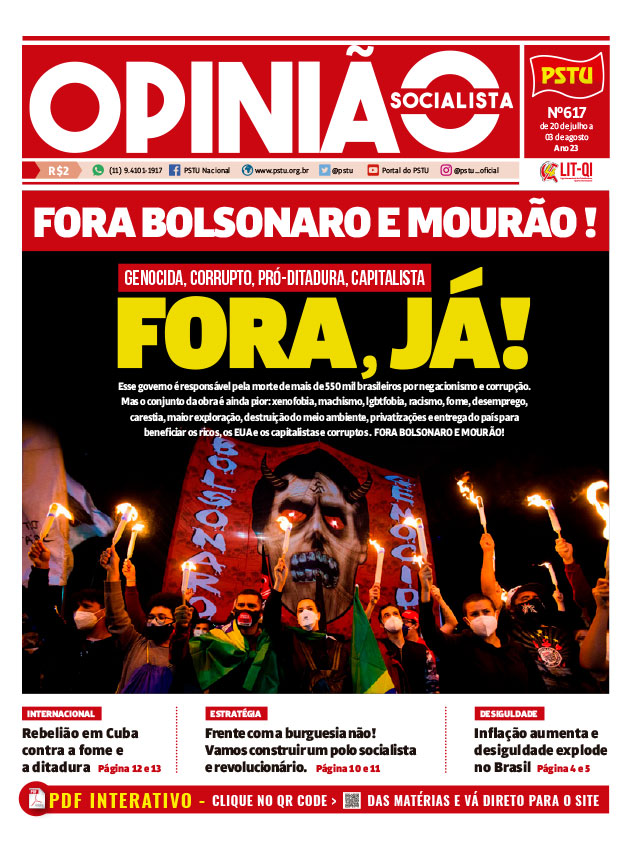